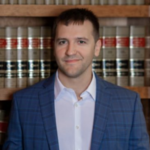 Josh started his career in the military where he served two tours of combat in Iraq and Afghanistan. After leaving the military, he received his law degree from St. Louis University. Within a few months of receiving his license, Josh took a difficult case to trial and beat the State of Illinois. That began his career as a trial lawyer. Soon he would focus his attention on securing just and fair compensation for injury victims. In 2019, he secured a jury verdict of over $800,000 for the victim of a rear end car wreck.

Today, Josh thrives in the areas of wrongful death, serious personal injury, and occasionally assisting other lawyers in general civil litigation. A major turning point for Josh's practice came when he accepted a personal injury matter where two other lawyers turned down the representation. Without trial, Josh was able to secure full and fair compensation to the victim in the amount of $500,000. Coincidentally, Josh began receiving many referrals from other lawyers, including other injury lawyer, after that resolution.

Josh has litigated personal injury cases where the resolution involved seven-figures settlements to the victim. He regularly co-counsels and accepts referrals from general practitioners in serious automobile injury, medical malpractice, and complex personal injury matters. In addition, probate and estate lawyers regularly consult, co-counsel, and refer estate litigation matters to Josh, tapping into his wealth of knowledge and experience in litigation.

Not afraid to take on the powerful, Josh has made a cornerstone of his practice fighting powerful institutions and governmental entities. For instance, Josh litigated in the Central District of Illinois a matter resulting in nearly $100,000 in compensation to a wrongful arrestee who sustained no bodily injuries. While he routinely sees bodily injury cases, Josh has litigated serious property damages claims as well. In 2018, Josh successfully litigated a federal court case against the City of Grafton resulting in the City compensating the victims' for the loss of their homes.

While he may be more known for lawsuits against governmental entities, Josh has litigated against hospitals, large corporations, institutional banks, and greedy insurance companies. His passion for helping those in need comes from his military service and upbringing in a small farming community in Greene County, Illinois.